What is Accepted Value Costing?

Accepted Value Costing is abbreviated AVC. It is a lightweight proportional cost allocation approach for practical decision making on Lean-Agile cadences. Theoretically speaking, it is a Lean-Agile extension of two-phased activity-based costing. It is much less wasteful than project-based costing, and it is far more effective than cumbersome and misleading timesheet-based labor accounting approaches.

AVC is field-tested. It adapts activity-based costing to the Lean-Agile paradigm of fixedCost + fixedTime + variableScope. It was developed for Lean-Agile methods within the knowledge work domain.

In a nutshell, AVC focuses on actual indirect labor expense allocation in a way that is fully normalized across teams and scalable across portfolios. It proportionally allocates indirect labor expense using empirical data derived from actual accepted value. It promotes the use of a decision-making model so that cost-to-value comparisons can be made consistently, objectively, and on relatively short feedback cycles.

AVC was developed by David Hughes, a management consultant for Lean-Agile transformations. He lives in Exton, Pennsylvania U. S. A.

Figure 1 illustrates all the components of AVC so that its roots in two-stage activity-based costing can be seen. The ordered histogram is a function of proportional indirect labor cost allocation based on actual accepted value.

Figure 2 illustrates the typical decision-making model applied to the ordered histogram on a Lean-Agile cadence. 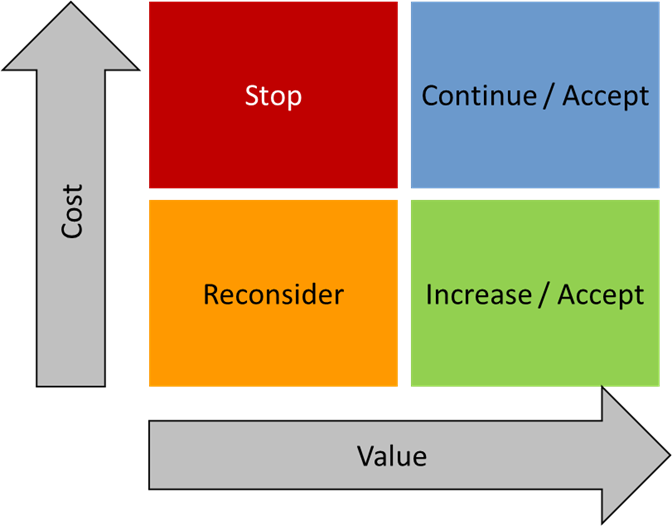 Can I Get Slide Decks, Work Templates, and Drills To Help Me Learn and Apply Accepted Value Costing?

The AVC community supports a Slack channel and other knowledge-sharing channels through which slide decks, work templates, drills and other artifacts are available, on request. Your journey starts with an email to AcceptedValueCosting@Gmail.com.

Why Was Accepted Value Costing Developed?

The building blocks for aligning financial and management accounting with the Lean-Agile philosophy have been discussed almost as long as Lean-Agile methods have been used but, for a variety of reasons mostly rooted in fear of change, they have not been combined in practical, easy-to-use tools and techniques. Those who have figured out an approach mostly report on the revolutionary change with which they were successful. These reported successes ultimately involved senior executive power driving changes to organizational funding and decision-making in a top-down fashion.

An evolutionary approach is needed, one that is simple and easy to use in a wide range of Lean-Agile situations. AVC is rooted in the theory and practice of management accounting, Lean product and process development, and the Agile philosophy. AVC defines a set of tools and techniques that can be introduced as an experiment and evolved over time to suit each unique situation.

AVC is a permission giver. It flows around obstacles to its adoption because it is lightweight, easy to automate, naturally scalable, and fully aligned to Lean-Agile good practice patterns of behavior. AVC can coexist with the traditional project-based costing structures and timesheet tracking systems it is intended to supersede.

Why Should I Be Interested In Accepted Value Costing?

Traditional management accounting structures are complex, deeply entrenched based on long years of hard experience, and effective in satisfying executive management. Ironically, they are very costly. They are slow to respond to change, too.

Unevenness. Overburdening. Waste. These evils are well-known among Lean practitioners as mura, muri, and muda. The central tenet of AVC is that project-based costing and its related timesheet tracking contribute to these anti-patterns. AVC defines an evolutionary path away from project-based costing towards two-phased activity-based costing using activity cost pools. AVC exploits the fact that Lean-Agile teams define and continuously improve value stream mapping as a matter of course. For this reason, they naturally do what non-Agile practitioners tend to think of as the biggest barrier to adopting activity-based costing, namely, process-based value stream mapping defining activity cost drivers and activity cost pools.

The rudiments of AVCï¿½s proportional allocation approach first were applied to Agile teams within a systems development program at a large insurance company. The original need was for a flexible Lean-Agile funding layer to encapsulate a traditional project-based costing scheme. This layer worked by proportionally allocating indirect labor costs across accepted features using story points within the Scrum Framework. The result was a more nimble and reliable funding model based on business value. The traditional project-based costing scheme was retained for traditional reporting and for traditional budget change control because both were deeply ingrained. The proto-AVC layer, however, quickly emerged as the basis for dynamic reprioritization of product features and funding reallocation decisions on faster cycles than were possible with the traditional schemes.

Later, AVC developed into a scalable decision-making tool at a large commercial mortgage company. It was applied successfully on that firmï¿½s largest and riskiest new product program to-date. It proved its value as a dynamic funding approach over a full calendar year involving four major product planning and release cycles.

When Was Accepted Value Costing Announced?

AVC first was formally presented at AgilePhilly and at Lean-Kanban North America in April 2018. AVC first was presented in workshop form at the Agile and Beyond 2018 conference in May 2018.

How Does Accepted Value Costing Improve On Other Approaches?

AVC is a lightweight, cost-effective approach for identifying low-value/high-cost deliverables and eliminating them from the value stream. AVC shifts decision making away from heavyweight cost accounting skewed toward forecasting and project baseline variance tracking. Instead, it identifies low-value activities at the earliest possible moment, on a cadence. Instead of saying: Did we spend according to our project forecast? AVC allows us to say: Did we actually apportion our labor expense in line with current perceptions of value? AVC does this by projecting back from accepted value using relatively short time increments. In practice, projecting back over a 90-day cycle has been shown to be effective.

AVC avoids the pointless exercise of trying to force fit indirect labor allocation for knowledge work into CapEx and OpEx structures. Instead, it directly applies the Lean-Agile techniques naturally used by teams to allocate indirect labor proportionally as a function of actual value accepted.

Is Accepted Value Costing Just A Variation On Beyond Budgeting?

AVC offers a lightweight solution to the problem framed by Beyond Budgeting researchers:

The problem is that because budgets show the costs of functions and departments instead of the costs of the activities people perform, managers cannot see the real cost drivers of their business (italics in original). Moreover, it is likely that the budget contains significant amounts of non-value-adding costs that remain invisible to managers looking at the financial numbers.

What Are The Benefits of Using Accepted Value Costing?

AVC creates capacity by identifying and eliminating value stream waste at the earliest possible moment. For this reason, alone, AVC is a major improvement on traditional and other Lean-Agile approaches to decision making based on value.

AVC reinforces the desirable patterns of Lean and Agile teamwork which strive to eliminate multitasking, context switching, high transaction costs, and large-size batch transfers. It aligns closely with the fixedCost + fixedTime + variableScope paradigm. It aligns fully with two-stage activity-based costing which is designed to reveal value-added versus non-value-added cost drivers.

The benefits of using AVC are:

1.       Lean-Agile servant-leaders need up front buy-in neither from cost center managers nor executives. Initially, nothing is changed because AVC encapsulates the traditional project-based costing system. It provides another perspective, another management accounting lens, into indirect labor expense. This is the dominant cost/value factor for knowledge work.

2.       AVC shifts the perspective away from cost control to value-based decision making. Cost control systems are for operational expense, or OpEx. However, OpEx decision-making cycle times are at least one order of magnitude longer than Lean and Agile cadences.

3.       As Lean-Agile teams accelerate beyond their initial minimum levels of performance, the alignment between the right level of proportional allocation and two-stage activity-based costing increases. Ultimately, two-stage activity-based costing is indistinguishable from Lean cost management, Agile planning on a cadence, and Beyond Budgeting practices. These all converge quite effectively as long as the right level of proportional allocation is used. AVC fosters this convergence and defines the right level for Scrum and Kanban methods.

5.       AVC avoids the all-or-nothing revolutionary barrier to change and it gets simpler and more effective to use as the capability maturity level of Lean-Agile teams rises.

6.       AVC does not require that all teams standardize on a single metric basis. The AVC approach is a proportional, not an absolute, approach. Since proportional, or relative, estimating is a cornerstone of Agile approaches, the original hypothesis that AVC would scale naturally and without limit has been proved in practice.

What Are The Key Terms for Accepted Value Costing?

AVC is the Lean-Agile extension of two-phased activity-based costing. Key terms and their definitions reflect this.

Has A Literature Search Been Done To Place Accepted Value Costing In A Context Of Current Research?

AVC was developed only after a formal search for a workable solution to the problem of value-based Lean-Agile decision making was completed without a satisfactory result. Now, the AVC community maintains an annotated bibliography. This bibliography serves two purposes:

1.       To reveal the literature and practice sources consulted during the development of AVC so that others independently can reproduce AVCï¿½s results. This is in the best tradition of the Scientific Method.

The annotated bibliography is available online at http://www.dhughes-avc.com/SMT$/SMT$_Annotated_Bibliography.pdf .

Your journey starts with an email to AcceptedValueCosting@Gmail.com.